Cyprus has unveiled a new underwater attraction: A museum of 93 underwater sculptures by British artist Jason deCaires Taylor. Andrey Bizyukin went to Cyprus to check it out. He shares his surreal experience in this underwater wonderland. Cyprus is known to most divers as the island of wrecks. Many have heard about the wreck of Zenobia, Constantinos, Lady Tetis and others. However, not all divers like wrecks. To dive and penetrate a wreck, divers need additional training and must purchase special equipment. Therefore, the number of divers with an appropriate level of training and equipment is essentially limited.

Then along came the Covid-19 pandemic, which changed many a diver’s plans and limited travel opportunities. Some dive operators were forced to close their businesses for a long period of time, some went bankrupt, and some started implementing old plans to conduct dives in local waters. The dive community in general was pretty depressed. For some, the pandemic turned out to be a mythical “Black Swan,” which destroyed all plans, but others treated it with a philosophical approach—as a new opportunity, a wonderful unique chance to do something good for the environment and respond to the hint given to us by nature itself.

When considering a vision for the future, the most intelligent and creative people of Cyprus assessed their prospects and calculated their options. Then, during the pandemic, the mayor’s office of the city of Ayia Napa decided to take the opportunity to spend one million euros to create a new unique underwater museum—the Museum of Underwater Sculpture Ayia Napa (MUSAN). The museum is accessible to nearly all water sports enthusiasts, snorkelers and divers of all levels and ages.

Jason deCaires Taylor, the renown underwater sculptor, was invited to create the museum and underwater park. Not only was he an artist who was not indifferent to the problems of marine ecology and climate change, but he already had extensive experience creating underwater sculpture parks in different seas around the world.

For my fellow divers and me, the temptation to go to Cyprus and dive there to see the underwater museum with our own eyes was so great that we began to look for opportunities. Was it possible to get to Cyprus from Moscow during the pandemic? It turned out that it was indeed possible. If you had been vaccinated against Covid-19, then you no longer needed to do PCR tests. You just had to upload your vaccination certificate to the Cyprus flight pass website (cyprusflightpass.gov.cy), get a QR code, and you could fly.

In just four hours of flight time, we were in Ayia Napa. Once a small village, today it was a beautiful city full of hotels, attractions, tourists, divers and now, its very own underwater museum.

To get to the site, we left port in a bright yellow catamaran named Yellow Submarine. The captain, dressed like a real sea dog—albeit, in swimming trunks and a bandana—personally greeted each diver. The dive operator told us that the underwater museum had 93 sculptures made of environmentally friendly materials, good for the sea and its inhabitants. The sculptural composition was assembled and installed on the sandy bottom of the bay, at depths from five to eight meters, around 200m away from the city’s embankment.

A ten-minute trip from the port to the bay got us to site of the underwater museum, whose water boundaries were marked with stationary buoys. After a short briefing, we got into the water. Visibility was about 20m, and the water temperature was a balmy +29°C. We swam close to the buoys, where the outlines of this grand “miracle” underwater were already visible from the surface.

We started our dive from the side of the installation in order to have a look at the statues of human and hybrid forms, which stood among a variety of organic sculptural forms of trees and underwater plants. All together, they looked like a nice underwater nature park. The sculptural compositions could be divided into three or four parts, arranged along a straight line with a length of about 50m.

It was recommended that we start the tour by visiting the museum from the city embankment side. Here, there was an official entrance to the museum. We were greeted by sculptures of children with video cameras in their hands and unusual cone-shaped structures made of rods with dummy video cameras mounted at the top. We dived through the exhibit and got into an artificial garden of underwater algae, with leaves made of shiny metal attached to cables. They were held in an upright position by large blue buoys.

Diving here felt like we had wandered into the famous kelp forests of California. This part of the park was the most similar to traditional diving experiences in the underwater world, with which every diver can relate.

Continuing onwards, we swam through a park of artificial trees that looked like huge cactuses. Following these sculptures were trees with artificial branches and metal leaves. The presence of these terrestrial trees in an underwater context caused some dissonance upon viewing. Normally, trees do not grow on a seabed, as we all know, but the artist’s imagination had found just such a creative solution. So, we could only remain casual viewers, who are not always given the right to vote or judge or even speculate upon what drives the creative imaginings of artistic individuals.

We moved through the museum, along the sea bottom, from the entrance to the end, and then back again, swimming this time above all sculptures. We were in a museum whose collection could be viewed not only from the front, the back, and the side, but also from above, which is very unusual. In addition, our eyes enjoyed the play of light and shadow on the metal leaves, tree trunks and folds of the figures’ clothing.

The museum seemed to be quite large and diverse. Everything was created with a deep sense of beauty. Everything was aesthetically pleasing. There was a strong desire to stay here as long as possible, to consider everything in the smallest details, which definitely caught one’s eye and attention. I wanted to stop at each of the sculptures and examine it from all sides, mentally communicating with it and pondering what thoughts were in the head of its creator. Some sculptures were duplicates but were exhibited in different contexts, creating completely different impressions. Here, in this underwater world, one just wanted to stop and step away from the busy tempo on land and think about the meaning of life.

The site for the museum was chosen very well. It was convenient and easily accessible, so that nearly all kinds of “waterfowl” could visit the museum, including divers, snorkelers and marine life. It was a real underwater oasis; swimming and diving inside it was easy, pleasant and interesting.

Marine life likes artificial reefs. They are places where comfortable conditions for marine flora and fauna are found. So, underwater sculpture parks do eventually become new homes for marine life, and MUSAN is exactly this—the first underwater museum in the Mediterranean, which is also, in itself, a “work of art.”

With just one scuba tank and a dive duration of an hour and a half, I had experienced the delight of contemplating the beauty of art and captured another hundred wonderful underwater pictures. I returned to the surface, joyful and inspired by the museum—back to the sun, the warmth, and the smiles of friends.

The pandemic will eventually end. Divers will return to their favorite activity and travels. In Cyprus, a very special, alluring underwater pearl of the Mediterranean awaits them—a new dive site called MUSAN. ■ 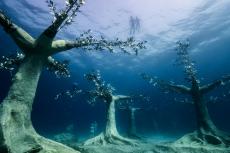 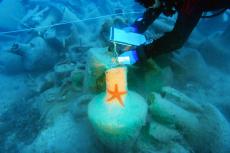 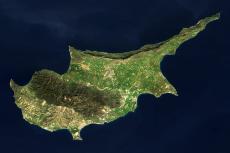 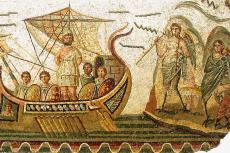