It was a day of unbelievable violence. Sometimes Nature decides to wake up and with an unforgettable result. This was the case on 26th December 2004 when the giant earthquake struck and a day that will be remembered for long time in areas as Simeulue and Nias Island, North Sumatra, Indonesia which were the nearest points to the earthquake epicentre. From this day on life changed profoundly for the islands’ inhabitants. Geography has changed, the beach has moved away. Everything that was underwater, corals, spong-es and algae is now out of the water for hundreds of kilometres along the coast-line. The earthquake on Dec. 26 lifted the seafloor about 2 meters both in Simeulue and Nias.

Now, one year after, the situation remains difficult. “Everything is changed in the lives of Northern Sumatra’s inhabitants”, says Sebastiano Gulinello—the Italian owner of the boat which carried us into the tsunami area. He has been living in Indonesia since 1999, doing surfer’s cruises.

“Most of them are going away. The earth is continuously moving, and the people who remain are dependent on the international aid. The economy is stagnant, and there are no signs of recovery”. Immediately after the event, the humanitarian aid arrived in abundance.

Boats that were usually charterboats for surfers transformed themselves in hospitals, medicine cargoships, and water and food transporters. But despite of this, almost a year later, recovery is not complete and inhabitants are still completely dependant on aid to survive. Sebastiano and his crew are experts in this area, which was seriously affected by to big earthquakes in 2004 and 2005.

They took us on tour to visit both islands for a scientific expedition organized by Ancona University (Italy), with the purpose of evaluating the damage caused by the earthquake and tsunami on Sumatra’s reefs, which are the resource that the local population is dependent upon as well as a tourist destination.

On board were specialists in different fields of coral biology, from invertebrates to fish ecology. We were witnessing a historic event, and were the first divers on the submerged reefs off Simeulue Island after the catastrophe.

“All people living in this area are frightened and people with money are leaving the area or buy-ing homes far from the sea”, Sebastiano says.“The Indonesian Government is pre-paring some emergency plans for the eventuality of another tsunami, since experts confirm that the event of another one remains a possibility”

Our first dive, in front of Busung, one of the small villages on Simeulue, was a little surprising: There was no apparent damage to corals due to tsunami, though there were some signs of dynamite fishing. The ecosystem was healthy, with corals adapt-ed to the strong waves that make this island a favourite among surfers.

Fish community seems to be in a good condition with butterflyfish, which are corallivorous, (eat corals, ed) and therefore a good indicator of reef health, are abundant and colourful.

The second dive was off the little island of Simelutjur, which is also exposed to strong waves, confirmed the previous impression.

The tsunami did not have any effect on an environment that was already well adapted to a “high-energy hydrodynamic situation” The following destination was Lakon, which were an incredible sight: The whole little island was lifted about two meters, leaving wide areas of reef exposed and out of the water.

Giant massive corals of the Porites genus, table-corals known as Acropora and Pocillopora lay bleached on the reef surface. Other areas, still moist from the sea sprays and high tide, were completely green because of the colonisation of algae. Walking on the exposed reef was very impressive. It was like a stony forest where we saw reef organisms such crabs, shells, sea urchins, stranded and mummified by the sun, unable to reach the sea that was now out of reach for them.

Now, the sea carried a lot of sand on the reef, transforming it in a sandy beach. Diving in front of Lakon confirmed the impressions from the topside scenario. The earthquake shook the carbonatic shelves, provoking some big collapses. The backwash of the waves then carried mud out to sea resulting in strong siltation and unusual water turbidity further out.

In other words, the water became clouded with particles and material that then settled on the corals with knock-on effects on the whole eco-system. Surgeonfish and parrotfish which feed on algae were prevalent in the fish community as they were the only ones able to find some food in this devastated ecosystem.

Besides, the more striking feature of the fish community was the impressive proportion of juveniles relative to adults (up to 70% of the herbivorous and 80% of the butterflyfish) recorded in the sites most affected by strong siltation.

This is unusual. Many fish species appeared in their recruitment stage, while many adults have been likely killed or displaced by the tsunami. The same impressive situation met us in the front of Langi village, where the presence of rice paddies and human activity have stolen more space from man-groves, which are plants with roots that could have retained some of the mud and detritus (dead organic matter, ed.).

People living in Langi told us about the primordial terror brought down on them during seven minutes of earth tremors, so violent that they couldn’t remain on feet while witnessing how the sea was sliding away, and the corals going up for thousands of meters of the coast. Tradition and histories handed down from the village’s elders saved many lives this day.

Tales told about an old earthquake where the sea retracted following a giant wave that has destroyed the village in the early ‘900. The escape from the village saved hundreds of people. A few minutes later, in 2004, the tsunami wave on Simeulue killed only 6 people.“Sumong” in the local language means “tsunami”. The close tie Simeulue’s people have with nature made the difference in comparison to other regions, where the wave killed thousands.

Last stop was the little island of Silaut Kecil, the region closest to the earthquake epicentre. Some impressive breaks on the sea bottom was a testament to the incredible violence of the earthquake. Coral reefs in shallow water were completely destroyed, while the drop-off areas maintained a good overall condition, as they were apparently better able to resist to the quake’s power. Some big fish, as a manta ray and some school-ing bumphead parrotfish were still present, while in the other dive sites they were completely missing. Now, the project is to monitor the slow recovery of the corals. Probably the reef in this area will never be the same but coral reefs are dynamic systems, continuously evolving depend-ing on external conditions.

“There are some incredible dive sites in the Mentawai Archipelago” – Sebastiano told us, a dive instructor before starting the surfer’s activity - “and the Government is planning to make some little Marine Protected Areas”.

If not damaged by human activities (like cyanide and dynamite fishing), the coral will grow again but slowly. It will probably need at least 50 years in the impacted areas. But we will be given another chance of experiencing Sumatra’s underwater beauties. 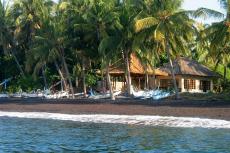 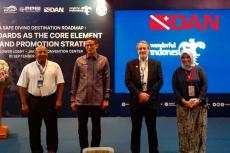 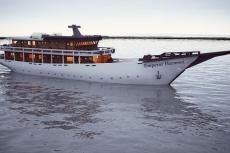 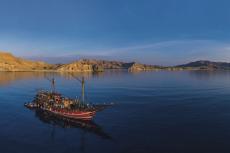 The Arenui is now better than ever!
Travel & Trips
END_OF_DOCUMENT_TOKEN_TO_BE_REPLACED