My first shark appeared head-on in the distance slowly swaying from side to side. With elegant grace and composure it continued towards the cage with mouth opened just enough to boast a healthy set of triangular teeth. Like the star of a grand performance, the shark held everyone in awe as it turned slightly just in front of the cage to examine an offering of tuna. It was a huge 14ft (4m), 2,175-pound (987kg) female. Her body was sleek and muscular, capable of high speeds if necessary. She ignored the bait and gave the caged divers a once over then slowly swam away, never changing her pace. Author, Peter Benchley, sure pegged it correctly when he referred to these creatures as “natural perfection”.

Once I became a scuba diver though, I was under the impression the only place to see this shark was in South Australia or South Africa. Unfortunately, visibility at both locations can often be poor for photography, usually ending in huge travel expenditures for mediocre shots.

True, the sight of these huge sharks hurling themselves out of the water in South Africa can be exhilarating. Yet, it’s one of those instances when everything needs to be perfect. The right location, time of day and camera settings must be precise in every way to be able to capture the true moment.

It wasn’t until I heard about the small volcanic island of Guadalupe,150 miles (241km) out from Mexico’s Baja Peninsula, that I realized a diver could have crystal clear visibility and comfortable warm water in which to clearly see and photograph great white sharks.

It was late September when I joined 17 others on the 116ft (34.8m) liveaboard dive vessel, Nautilus Explorer, for an expedition to Isla de Guadalupe.

We departed San Diego, California for the 220-mile (354km) journey organized by Doc Anes of San Diego Shark Diving Expeditions, a pioneer in the field of recreational shark encounters. During this time, we learned that Guadalupe is home to countless sea birds and colonies of elephant seals, California sea lions and the endemic Guadalupe fur seal.

In 1925, the island was originally established as a Nature Preserve and recently granted overall protection as a Biosphere Reserve in April of 2005, limiting human exposure.

Rebecca Kobelkowsky, a representative from the Mexican government, was also on board, assigned with the task of evaluating and setting new regulations for both commercial shark expeditions and sport fishing charters around Guadalupe.

The next day, Jessie Harper, one of Doc’s shark wranglers for five years, filled us in on a white shark photo identification project she began four years ago.

Within the last two years, the archival venture has evolved into a large binder identifying and naming over 50 individuals. Photo images are collected from visiting underwater photographers and catalogued, using scars, color patterns, dorsal and tail markings for identification. Jessie has since turned the project over to Pfleger Institute of Environmental Research in Oceanside, California, but continues to collect images for identification.

“We are seeing the same individuals year after year,” comments Doc. “Their personalities are as unique as their markings and they appear to be extremely intelligent by remembering failed attempts at getting the bait we set out to attract them with. When one direction doesn’t work, they try another and keep on trying until a different angle works.”

Sneaky Pete will actually sneak up on you. Flash just flies by when he shows up and Bruce, like Finding Nemo’s Bruce, is very big in girth! You can’t miss this guy. He also looks like he is smiling.

Many of the sharks have also been tagged, transmitting important data back to the institute via satellites telling of their location and other essential facts. The sharks appearing around Guadalupe have been tracked as far away as the Farallon Islands off California and to Maui, Hawaii.

“When hunting, these sharks will usually go after prey about one-third their length,” states Bob Gladden, a videographer for Doc’s Shark Expeditions. “That makes me about one-third the length of an 18-footer, a creature which weighs over 3500 pounds!”

With this in mind, I went to examine the three heavy-duty marine-grade aluminum cages on board. Two cages were 10ft (3m) long by 7.6ft (2m) tall and 38 inches (1m) wide, holding four divers while floating at the surface. The third, smaller cage was also along for shark observation at depth.

A huge freezer held a supply of frozen whole Blue-fin tuna and numerous frozen one-gallon (4-liter) jugs of “cow” blood. The tuna will be cut in half, tied to a rope, which looks like bailing twine, and thrown into the water by shark wranglers to encourage excitement. Live bait is also brought on board for fishing while enroute to and from the island.

I’m sure sharks were on everyone’s mind as they retired for the evening, in hopes of seeing “Bruce” the next day.

We awoke to find the remote island of Guadalupe gleaming in the morning sun with hues of bronze, red and gold gleaming in the rocky cliff face. I could only imagine how nice diving might be, but no one had any thoughts of jumping in to find out, that is, until the cages were lowered into the clear blue water.

With water temperatures of 70° F (21° C), I was grateful to have on my dry suit; 5-7mm full-body wet suits also worked. There were even a few who braved 3mm suits and others who jumped in for ten-minute intervals donning only a swimsuit. My thin warm-water cap worked very well, along with 3mm gloves.

Doc and Jessie set everyone up with DUI harness-style weight and trim systems, each containing about 40 pounds (18.1kg) so we could easily stand in the cages.

Entry was effortless, stepping from the back of the boat into the large cage opening. Four surface-supplied hookah regulators provided an unlimited supply of air, but we took one-hour rotation turns so everyone could have different locations to capture images from every angle.

Whenever my camera was handed down, there was always the initial adrenalin rush while waiting for the sharks to materialize as we hung in 200 feet (61m) of water with a mild warm oceanic current flowing by. I kept expecting the soundtrack from “Jaws” to be piped into the water to fuel our anxiety.

Although the cages were floating at the surface behind the boat, which was anchored, I wondered if a shark head or at least a few teeth might fit through one of the large camera openings. I always seemed to be hanging out of one of these openings.

Millions of yellow and white scad mackerel continually bore down on the bait, often running for cover behind the cages when the sharks showed up.

As if cued, white sharks began to appear as soon as the first diver jumped into a cage. Usually, they were alone when they passed by, but occasionally there were two traveling together, one following the other. As Doc mentioned earlier, they tried all angles of approach when interested in the bait. Their interest peeked mainly late in the afternoons. The sharks put on quite the action show both above and below the water.

We were like excited school kids. Every time a shark passed by our cage everyone would give a “thumbs up” and yell into their mouthpieces, especially when the sharks outwitted the wranglers and nabbed the bait.

Just as I would regain my wits, another shark would appear. It only took minutes to blow through 36 exposures in a film camera, making the digital system a real asset when a one or two gigabyte memory card was added. Most of the time I was able to set my Nikon D70 on automatic settings with excellent results. Before I knew it, I was on my fifth one-hour in-water shift and had already filled one of my three 1GB cards during the first day.

“I never imagined there would be so many sharks,” exclaimed Mike Lever, owner/operator of the Nautilus Explorer. “I thought there would be sparse sightings throughout the day—not a shark every five to ten minutes, all day long…”

Needless to say, I think fatigue hit us all that evening at dinner. As usual, food on the Nautilus was excellent and Mike’s crew was incredible. I’m sure we all went to sleep that night seeing nothing but sharks.

Not as much eagerness from the divers the next morning, probably because we saw 6-8 different individuals making numerous passes yesterday. This allowed a few of us die-hard photographers a chance to spend hours on end in the cages, photographing, filming and studying the sharks.

I was even able to focus on something other than sharks, like the pelagic realm of gelatinous critters all around. Thousands of tiny undulating iridescent life forms floating by made me crave a macro lens.

Later that day I accompanied Rebeca on her first cage dive and great white encounter. Rebecca wanted to see and experience first hand why so many people were attracted to the island and what the big deal was about this species of shark.

Nautilus crewmember, Bob Crawford, donned his 1940 Morse abalone hardhat and suit, to join us. His boots weighed 17 pounds (7.7 kilograms) each; his weight belt was 80 pounds (36 kilograms) and the helmet – 45 pounds (20 kilograms)!

The way the sharks kept closely passing by, it appeared they were very curious and responded to noises like recycling strobes and the clanking sound of Bob’s boots. I was actually able to get several of the sharks to individually circle back 3-5 times each by manually recycling my strobe! As with everyone before her, Rebeca was amazed at the beauty and sheer dominant presence of the sharks. What an awesome first underwater experience for anyone.

“You don’t have to be a certified diver to jump in the cages,” explains Doc, “Everything is safe and the air is on demand.”

To take advantage of the early morning soft light, we took the skiff and cruised the shoreline early the next morning. Cute tiny Guadalupe fur seal pups cried for their mothers on a northern boulder covered beach near Spanish Bay. Farther down the beach juvenile elephant seals practiced their fighting techniques. Although these are the white shark’s natural food, they weren’t actively hunting them at this time. A working unmanned light station, the remains of an old fishing shack and what was left of a church from an abandoned prison was also seen.

Overall the trip was quite rewarding. Videographers acquired breathtaking footage and still-photographers went home with hundreds of excellent action shots. Rebeca, Mike and Doc worked out alternative methods to using cow’s blood and all are keen on finding ways to work with Guadalupe’s residents for eco-friendly future tours.

“Conservation on Guadalupe Island is a huge issue for us,” explains Mike. We are working on a plan to build a school for resident kids and improve the island’s airstrip because there is a 95% certainty that we will be offering “fly-in” trips to Guadalupe for 2006, offering seven trips. Regardless of whether we offer fly-in or ocean passages, we will be taking 22 divers in 4 cages.

Each cage will be 9’ long and accommodate 3 guests with bi-level wraparound camera ports (so you can shoot either standing up or kneeling). Two of the cages will trail from over-side booms and have a 360-foot view. I can confirm that one feels awfully vulnerable hanging out there! The other two cages will trail from the transom. There is a possibility of a 5th cage suspended at 20 feet.” ■ 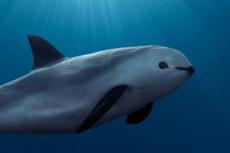 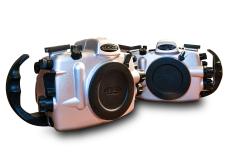 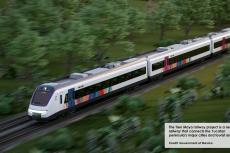 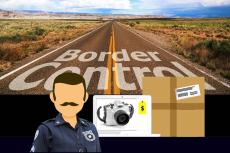