The world in one country is an oft-used quote to describe South Africa and is not unwarranted. Along with dramatic scenery and a rich cultural heritage, it is a nation renowned for its diversity of ecosystems and wildlife.

However, its undersea environs rival the terrestrial abundance. From northern subtropical reefs to the chilly waters of the cape, South Africa offers a wealth of marine life few nations can rival. I had a brief introduction several years earlier, visiting Aliwal Shoal and Protea Banks in KwaZulu-Natal and the Kruger National Park [see X-RAY MAG issue #46 –ed]. The diving was unlike anything I had done before not to mention challenging. And there were sharks—lots of sharks! From that moment, I planned to make a return visit.

Like an aquatic version of the Serengeti’s wildebeest migration, South Africa’s Sardine Run is one of the world’s utmost undersea spectacles. During the winter months from May to July, a cold south to north-flowing current develops off the east coast, moving inshore and counter to the warm Agulhas current. After spawning in the cool waters of the Agulhas Bank, millions of sardines surge up from the Cape, following the current to the Transkei and KwaZulu-Natal province. The migration fuels an explosion of life, with all manner of predators partaking in the rich bounty, including dolphins, sharks, whales and seabirds. However, this is no guaranteed event; sardine numbers vary on a yearly basis and is only considered a “run” when the shoals are large enough to be seen at the surface.

Having seen the spectacle on nature documentaries, I was eager for an up close and personal experience. When my good friend Sonja Newlands announced she would be leading a group from the United States and invited me along, how could I refuse? Factoring in time for additional activities, the biggest challenge was narrowing the options. With Sonja’s help, I decided on some Zululand game reserves and Cape Town.

After a grueling trip from Toronto to Durban via London, I arrived in the morning. A recuperation day was welcome and Sonja couldn’t have chosen a nicer place. An hour’s drive north of Durban, the holiday town of Ballito featured green hills cascading to golden beaches reminiscent of Sydney’s northern suburbs. “The Vineyard at Ballito” was a beautiful bed-and-breakfast nestled on a hillside a short walk from the beach. For my first night, I decided to splurge with dinner and Al Pescatore, situated right across from the beach, came highly recommended. The seafood platter was the epitome of extravagance, replete with mussels, prawns, oysters, fish and lobster. A Ballito iced tea, a concoction of ginger ale, sprite and five unknown spirits, necessitated another notch to my belt. People were very friendly, especially the owner, coming over to chat with the poor lone Canadian. If this was winter, I’ll take it!

The following morning, Sonja arrived at 8:30, and it was a challenge packing all of my gear into her small car. We then headed to the airport to meet the Enfield scuba group from Connecticut. Right away, I could see it was a diverse but very nice group. With over 18 people and a ton of gear, Sonja had chartered them a bus, although two, Laura and trip leader John Langlois, rode with us. Our destination was the town of Port St. John’s in a region of the easterly Transkei called the Wild Coast. Here, the continental shelf plunges sharply close to shore, resulting in enormous waves and tempestuous seas. I was soon to discover the name was highly appropriate.

Travelling on the motorway, the first few hours were easy. Past Shelly Beach, the motorway ended abruptly, becoming two-laned and potholed. We soon crossed into the Eastern Cape or Transkei, which, until the early 90’s, had been a separate region like Swaziland and Lesotho. Towns became fewer and further apart. The landscape was striking, with golden hills of grass dotted with numerous houses. Many were round with thatched roofs. Sonja informed us that this was deterrence against evil spirits, as they had no corners to hide in. As the road gained elevation, the locals were bundled up in hats and heavy coats. No matter how remote, every town seemed to have a KFC.

Arriving at N’taba Lodge outside of town, we were greeted by owners Ivan and his wife, Bugs. (No, not her real name. Sonja has known her for years and still doesn’t know it.) Situated alongside a river flanked by rugged peaks, the location was stunning. In the midst of renovations, severe floods had damaged the dining room and terrace overlooking the river four months earlier. Most of the damage was wrought by sand, but optimist Ivan regarded it as free building material.

As the mountain of gear was unloaded, we enjoyed a welcome drink. Also on hand was boat captain Ant and partner Lauren and dive guide Mike. Prior to dinner, Ant gave a briefing on what we could expect for the ensuing week. Right away, I knew this would be no walk in the park.

Like most South African diving, we would journey by zodiac. Being in the middle of nowhere necessitated all gear, zodiacs included, must be brought in. With our large group, Sonja chartered two zodiacs from different operators in Umkomaas, outside of Durban. On average, we would spend six hours at sea daily, returning around 3:00. Fortunately, as the action occurs near the surface, deco issues would not be a problem. With temperatures around 15°C to 21°C, the water was warm enough for a 5mm wetsuit with boots, gloves and hood.

The sardines would not be a gigantic unbroken mass, but fragmented schools. Ravenous for plankton, the fish converge close to shore, constrained by a preference for water temperatures of 20°C or less. Shoals may exceed 7km in length, 1.5km wide and 30m deep.

To minimize chances of predation, they mass together in bait balls 10-20m in diameter. Clearly visible from the surface, they are ideal targets for bottlenose and common dolphins, Cape gannets and a range of sharks including bronze whalers, blacktips, dusky, ragged-tooth and zambezis. Even whale sharks and great whites have been observed on occasion (...) 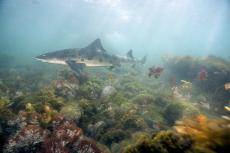 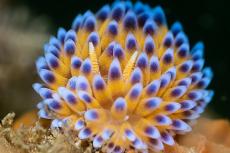 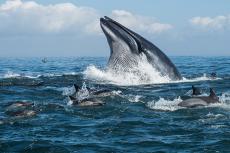 Sardine Run and the Interaction of Predators
Travel & Trips 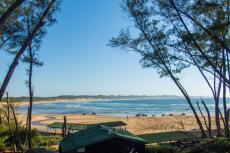