As The Year of the Shark 2019 draws to a close, we look out across the planetary oceans to learn the plight of sharks, after a year of spreading the word about their desperately needed protection. What we see is that sharks are being targeted by international factory fleets around the world who trail millions upon millions of baited hooks through their realm, trawl the sea floors for rays, skates and other bottom dwellers to 4,000 metres, and slaughter them by the millions. Sharks are the only profitable prey remaining, now that ninety percent of the original (fish) fisheries are fished out.

Thanks to the shark fin trade, the shark has become one of the most valued animals, with the result that these top predators are being targeted even by fleets that used to toss them out as trash. Their meat is thrust onto the markets and sold by different names; there is such a surplus that it is being used in everything from dog food to make-up.

Further, the meat of sharks is toxic. As top predators, they accumulate high levels of mercury, lead, and other poisons during their lives and they should not be taken for food. Even hunters would not recommend that we turn to eat wolves and cats instead of chickens and cows.

An ecological catastrophe has resulted from the shark fin market. Sharks are the worst off of all vertebrate animals while having high ecological importance as top and middle predators.

And in spite of all of our efforts, and those of shark conservationists around the world, shark killing continues to escalate and there is less hope for them now than ever.

If history has taught us anything, it is that no animals can withstand targeted, mechanized, industrial hunting—not whales, not turtles, not fish and not sharks.

The fisheries industry spins tales about this robbery of Nature being ‘sustainable,’ even while one shark species after another reaches the point of critical endangerment.

Yet fisheries management, apparently afflicted by some territorial idea that sharks belong to them, continue to claim that they retain the right to fish sharks, even though they have already caused the loss of an estimated ninety percent of sharks globally. Their talk is bombastic and rhetorical; they sound as if they are addressing their buddies over beers in a bar, and they never mention what happened to all of the fish. Or explain why we, the people, should now let them kill all of the sharks.

These are the same people, who, just years ago, were killing sharks and throwing them away, declaring that they were nothing but “trash.” Now they want to profit from the shark fin trade and recreational shark fishermen are on the same wagon.

But according to the biggest global studies of shark depletion, Fisheries’ management has failed this entire line of animals. The shark biomass of all species required to support the documented shark fin trade was estimated to have exceeded the catch fisheries reported to FAO (the only organization that keeps track of the figures globally) by three to four times.

The suffering of fish was established nearly twenty years ago; they may actually suffer more intensely than we do. Yet, fisheries, as a multi-billion dollar industry, has managed to take control of the public’s perception of these animals, as well as the animals themselves. As a result, in spite of the facts, fish have not been protected by the anti-cruelty laws that have protected mammals, birds and reptiles. In Florida, for example, you are guilty of a felony if you are caught fighting dogs or birds, but it is legal and considered culturally admirable to hook sharks through their mouths or guts and fight them to death. The recreational shark fishery in the USA is the largest in the world.

And the conclusions and recommendations of the fishing industry and its spokesmen are always in favour of fishermen—not fish, and not sharks.

However, sharks are not owned by shark fisheries, but by the ecological systems that evolved them. They are the children of the eternity that has passed since our planet filled with life, and we have an over-riding responsibility to protect sharks, marine animals, and wildlife in general, and keep their ecosystems in good health—in trust—so that future generations will enjoy the continuation of our bountiful planetary biosphere.

The priorities now should be to remove increasingly large areas from fisheries access through the establishment of Marine Protected Areas, and at the very least to have sharks protected from international trade, which is the protection given to sea turtles. Since the protection afforded by CITES listings is opposed by shark hunting nations, given one species at a time, and fails to protect the animal from death, it is not working. There is no reason why the decision could not be made to protect all sharks. A ninety percent depletion of their numbers is already too much.

The effort to weaken the shark fin trade is vital, through the banning of commercialization of fins and encouraging consumers to change the recipe of the fatal soup and stop buying shark fins.

The World Bank published a study entitled “Sunken Billions” in 2009, and an update in 2017. It found that unsustainable Fisheries management practices have led to globally depleted fish stocks that produce $83 billion less in annual net benefits than would otherwise be the case—ninety percent of fisheries are over-exploited. To address this global crisis, the main requirement is that fishing effort is diminished, while at the same time, fish stocks must be rebuilt, and coastal ecosystems returned to a state of health.

This study specifies that little is known about the actual carrying capacity of most fish stocks that are subject to commercial exploitation, and in spite of what it claims, Fisheries’ data are often highly uncertain.

Sunken Billions predicts that social unrest will result from the necessary reduction of fishing effort that must come, because some fishermen will have to turn to other occupations.

So the current outcry from the shark fishing industry in the face of shark conservation efforts has been predicted, and is understandable, but indefensible.

The World Bank recommends that the fishing subsidies that have facilitated over-fishing in the past be used to ease this social transition.

Priority should be given to local fishers who depend on the sea for their protein. Western consumers, who are already eating too much protein, would just choose something else if fish were not on the menu. These are wild animals, and with the human population already so bloated, and growing fast, no wild animal should be expected to support us.

The international trade in shark fins has wasted billions of animals for a bowl of luxury soup prized in just one of the world’s cultures. This fact is an illuminating example of just how wasteful and arrogant human demands can be on planetary resources. 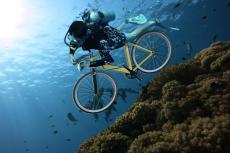 Just Like Riding a Bike: Diving After a Break
Op'eds and commentaries
END_OF_DOCUMENT_TOKEN_TO_BE_REPLACED