Israel: Journey Beyond the Three Seas

On my first flight to Israel, I stretched out in a comfortable chair on EL AL Airlines, enjoyed a kosher meal and reread notes by the famous Russian traveller and pioneer explorer, Afanasiy Nikitin (circa 1466-1472). Only on the approach to Tel Aviv did I suddenly realize how small a country Israel was, and that it bordered three seas. Now, I had a unique chance (just as the great Russian explorer did) to visit these three seas—the Red Sea, the Mediterranean Sea and the Dead Sea—all in one trip. With my dive buddy, Yakov Samovarov, I would dive the missile wreck, Satil. I asked Yakov to tell me about the day’s dive. “Six or seven years ago, I did my first dive on Satil,” said Yakov. “It was formally known as the Israeli Navy missile boat with the proud name of Sufa (Storm).”

In 1993, Sufa was decomissioned from the Navy and sunk in Eilat as an artificial reef. All military equipment was taken out before this procedure. Now, the ship rests on a level keel very close to shore.

The bow of the Satil is located at 18m, the stern, at 21m, with a maximum depth of 24m. The ship has long been overgrown with a thick layer of algae and corals. Inside and around the vessel are darting swarms of sea bass, barracuda, lionfish and rays. Beginners can dive to the top of the wreck, and experienced divers are allowed to penetrate the interior.

We arrived at the Marina Divers club, unloaded the gear from the car, drank some water, heaved our scuba gear onto our backs and headed out to the sea via a cozy beach. The beach crowd slurped ice drinks through straws. Sunbathers lounged in deck chairs under sun umbrellas and looked with interest at the men in black wetsuits, fins in hand and scuba gear on their backs.

We were “men in black”, bent under the weight of our equipment, moving in a chain, like ants, eagerly heading towards the water. I couldn’t help but think what a shame it was that the sun worshippers we passed would not see all the beauty that could be found in the underwater world.

The wreck of the Satil was located 90m from shore. Diving there was easy, even for a novice. A striped, red and white buoy marked the location of the wreck. The first time you go, you should probably bring a compass for direction. Frankly speaking, finding a 45-meter ship underwater is usually easy, but here, it’s almost impossible. I say almost, because from time to time, there have been cases where divers have managed it without a compass.

We got in line with Sasha, our dive guide, as two links in the chain of divers entering the water. Sasha had warned me that the bottom was rocky, with a lot of large slippery boulders, so I had better to go slowly, especially if there were waves on the surface, and my hands were busy steadying the equipment. We submerged in the water to our waists, donned our flippers, spit into our masks to avoid misting, placed our mouthpieces, exchanged okay signals and dived.

We started the dive from a shallow place and quickly reached a steep slope. The depth increased rapidly. At a depth of 10 meters, a small cliff rose two meters from the bottom, covered with corals and shoals of colorful fish scurrying around. White boxer shrimp with long antennae protruded from deep cracks.

In the corner of my eye, I noticed a small white headed snake eel, but there was no time to consider it. I had to catch up and hang out in the wake of a couple of dozen divers kicking their fins, when a huge ship appeared suddenly out of the blue shadows.

It stood exactly on its keel, and at this point, the deck could not be seen. For some reason, the Flying Dutchman came to mind. In some places, the vessel’s rusty sides had had time to acquire hard corals—poles, shrouds and the mast were lushly overgrown with bushes of white and reddish-brown soft corals.

We got to the bow of the wreck, the upper deck, at a depth of 18m. As experience divers, we first inspected the round hole in the bow. This was the position for a 76mm cannon. On the stern, there were two large rectangular cutouts; these were the positions for the missile systems.

It was nice to see so many divers underwater. Some of them swam towards the ship, some swam back. There were divers with single cylinders and twinsets, with nitrox and trimix, with underwater scooters and rebreathers. It felt like a group of European diving elite had gathered here underwater in Eilat.

We looked at the wreck from all sides, climbed up into the hold, inspected the crew cabins and the captain’s wheel cabin. We stopped to enjoy the spectacular views of soft red corals. We took pictures. It was a great wreck!

On the way back to the shore, we observed colorful tropical fishes living in coral trees, chasing a striped sea snake, swimming in a flock of curious, striped fish.

When I was on my way back to the back to Manta Diving center (the hosting dive center of the Epson Red Sea competition) to change my cylinders, I met a company of cheerful divers: men on a creative scouting trip with underwater photo and video cameras and made-up models dressed in brightly colored ball gowns and stylish, fashionable clothing. We started talking, and it turned out that the Epson Red Sea competition was going right now, here in Eilat, and all my new friends were participants in this grand event—the  ... 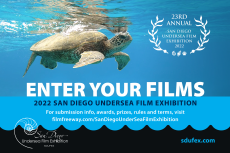