Approximately right in the centre of Jutland, the western peninsular part of the realm, there is a region called Søhøjlandet, which translates to “The Lake Highland.” It is a sparsely populated and largely forested area with many lakes, a large part of which make up a reserve. Denoting it as a highland is a bit of an embellishment, causing some Scandinavian brethren in Norway and Sweden, who have real mountains in their outback, to scoff. Afterall, the highest “peaks” are only about 150m above sea level. However, in Denmark, which is otherwise largely flat and predominately farmland, it stands out—and for good reason. It is picturesque!

Generously scattered among rolling hills, which are draped in forest or heath, are plenty of freshwater lakes and they are among the cleanest and clearest in the country.

Somewhat tucked away inside the hilly terrain of the Sønderskov wood, we find Slåensø. It is the cleanest lake in the country and its water is drinkable, as the local tourism office likes to point out. The only inflow to the lake comes from a few springs in the southern end, and since it is in a forest and a good distance from farmland where there is run-off from agriculture (which can leach into the lake), no pollutants can get into it.

The springs also give the lake its name. The Danish term “sø” means “lake,” so Slåensø means Slåen Lake. Originally, it was called Slaugen Sø, and the term “slaugen” comes from the Old Norse term “slagna,” meaning “springs.”

The lake, which is about one kilometre long and 275m at its widest point, is also known for it is high biodiversity of fish, insects, reptiles, amphibians, plants and more. In particular, it is known for its rich and varied aquatic flora. It is one of the only locations in the country where you can find all the species of aquatic vascular plants in Denmark, of which there are some 70 to 80, depending on which source you consult.

A vascular plant is any one of a number of plants with specialized vascular tissue. The two types of vascular tissue, xylem and phloem, are responsible for moving water, minerals, and the products of photosynthesis throughout the plant.

This sets them apart from kelp, which we encounter in saltwater. Kelp is large brown algae, and what appears to be its roots are holdfasts, which lock onto substrates made of rock, or cobble. Although it functions in this way like a root, a holdfast does not absorb nutrients, and kelp has no vascular tissue.

Vascular plants play a crucial role in freshwater lake ecosystems by transporting oxygen from photosynthesis to their roots, where it diffuses into the sediment or lakebed. This oxygen has two important effects. Firstly, it enables aerobic decay of organic matter, which sinks to the bottom, by microorganisms that use oxygen in their metabolism. By contrast, anaerobic breakdown is what we see in oxygen-depleted lakes, where the lakebed is smothered in thick layers of black loose sediment, which releases bubbles of “swamp gas” that smells like rotten eggs when you poke a stick in it. The unpleasant smell comes from hydrogen sulphide, which is a by-product of anaerobic metabolism.

The vascular plants not only sustain aerobic breakdown but also oxidise the top layer of the lakebed, creating a crust-like layer, which seals off any underlying composing matter and prevents the breakdown of this layer from consuming oxygen in the water column. The images in this article show how the lakebed is brown and firm, and not black and loose.

The plants also create a habitat and hiding places for fish and their fry, as well as aquatic insects. Here, we can also find amphibians and reptiles, both of which are threatened and protected. It was probably pure serendipity, but on my latest photoshoot, a grass snake (Natrix natrix), also known as a water snake, caught a frog right before my very eyes. The grass snake is a Eurasian non-venomous colubrid snake that feeds almost exclusively on amphibians.

Along the banks there are patches of water lily and potamogeton species, which are rooted in the lakebed, with leaves and flowers floating on or emergent from the surface.

Water lilies are rhizomatous herbs. A rhizome is a modified subterranean plant stem, which runs underground horizontally, sending out roots and shoots from its nodes. Rhizomes are also called creeping rootstalks, or just rootstalks, and they are high in starch.

Of potamogeton, there are about a dozen species in sizes ranging from large (stems of 6m or more) to very small (less than 10cm). The predominant and most recognisable is floating pondweed, Potamogeton natans. However, many of these species are difficult to tell apart, and their tendency to hybridise does not make a botanist’s life any easier.

Among the stems of lilypads and potamogeton, we can find clusters or mats of Canadian pondweed and hornwort, both of which are invasive species.

Canadian pondweed (Elodea canadensis) is a popular aquarium plant. It came to Europe, allegedly via a load of timber imported to the United Kingdom from Canada around 1836, and in a little over a century, it has managed to spread over the entire European continent.

Hornworts, Ceratophyllum sp., have stems that reach lengths of 1 to 3m (3 to 10ft), with numerous side shoots making a single specimen appear as a large, bushy mass. It grows completely submerged but can often be found floating on the surface in dense mats. The plants have no roots at all, but sometimes they develop modified leaves with a rootlike appearance, which anchor the plant to the bottom.

Pike (Esox lucius) has a very typical hunting behaviour. It lurks, perfectly still among the foliage. Before striking, it bends its body and darts out to the prey, catching its prey sideways in the mouth. 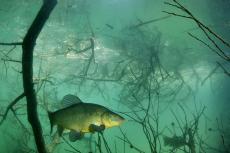 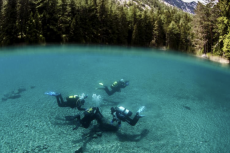 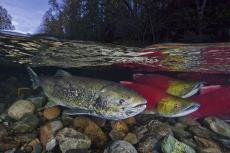 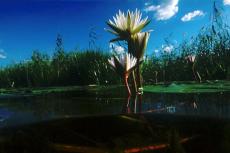